Marching for action on climate change 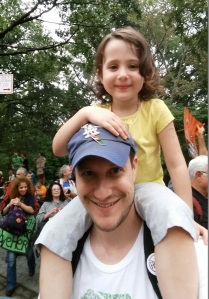 Several dozen Mennonites joined the estimated 400,000 people who walked in the People’s Climate March in New York City on September 21, 2014.

Two days later, world leaders met to discuss what actions they will take to address climate change. There is renewed energy for working toward a new international agreement at the 2015 United Nations climate conference in Paris, France.

(Photo: Adam Miller and his daughter, Violet, at the People’s Climate March)

Syria: The House and Senate authorized training and equipping members of the Syrian opposition as part of the military effort against the group calling itself the Islamic State. The votes occurred during debate on the “continuing resolution” bill to keep the government open. See how your representative voted. (The Senate did not vote on the Syria provision separately.) Days later, the U.S. began large-scale airstrikes in Syria, together with coalition partners. Senate leadership has called for a broader debate on U.S. military involvement in Syria and Iraq after the election, while House leadership says this should wait until the new Congress begins in January.

Immigration: Hundreds of women and children from Central America are now being held in newly opened family detention centers, which are coming under criticism for harsh conditions and restricted access to lawyers. The Obama administration is reportedly working to open a new 2,400-bed family facility in Texas. National letter opposing family detention | Immigration resources | Donate

If you are not currently signed up to receive action alerts, sign up here.

On September 16, we welcomed Kaitlyn Stump to our office for a fall internship. Kaitlyn is a senior at Malone University in Canton, Ohio, with a major in history and political science.

Rachelle Lyndaker Schlabach spoke at the Circle of Peacemakers Festival in Philadelphia on September 19, where she received their annual peacemaker award.

On October 1, Rachelle Lyndaker Schlabach was one of the presenters on a teleconference sponsored by the Faith Forum on Middle East Policy, Advocating for a just peace for Palestine and Israel – What can U.S. Christians do?

On October 2-3, Jim and Deb Fine, recently returned from four years of MCC work in Iraq, visited D.C. to share their perspectives with congressional offices and administration officials.

Tammy Alexander co-led a seminar on immigration at the Urban Anapbaptist Ministry Symposium in Philadelphia on October 3.

On October 7, we will bid farewell to Patricia Kisare. Patricia has made numerous contributions over the past four years as Legislative Associate for International Affairs. We will miss her expertise and her spirit for justice, but we wish her all the best as she moves on.